The ultimate guide to

online without getting banned or scammed in 2020 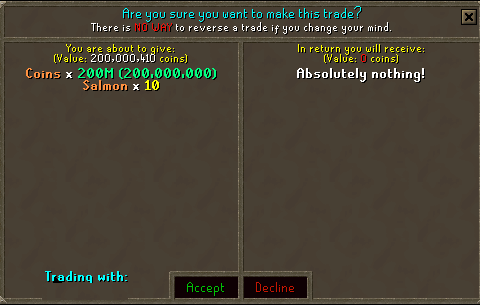 When selling gold, there are two important factors most sellers think about which are how not get banned and how not to get scammed. This article will cover both concepts.

There are many different methods of selling gold in Runescape but which one is truly the safest? Keeping your IP address and account unflagged is extremely important to prevent being banned on 1 or all of your accounts. We will tell you the safest way to sell RS Gold without getting your IP address flagged.

How not to get banned selling runescape gold

Sell on a member world! - You’d be surprised how many people try to sell 500m or more on a free to play world. Really think about it. What item in f2p cost over 20m? NOTHING. Doing this large of a trade is a big red flag.

1. If you are looking to shed off a little of your stack to get some extra bucks then you should be extra cautious about not getting banned. Jagex is very smart and will follow your accounts. Even if you use alt accounts they will follow the gold and possibly even chain ban you. Membership helps make that safe since most sellers still sell in F2P to save bond money causing Jagex to spend their time there looking for real world trade.

2.Why should I care about RuneScape Bans if I am quitting? More times than not, most people that leave RuneScape come back. You know what they say … you never quit Runescape, you just take breaks. More importantly, you can get banned during the time you are selling gold mid trade. This happens when you deal with a flagged account that Jagex is already monitoring and you won't even know it is flagged. Yep,That happens! Because of unsafe trading practices the person you are selling the gold to might get instant banned and probably will not want to pay you for the RuneScape gold. The $2.50 on a bond is well worth the safety to prevent all this.

Try to do business in your own country - You should always try to sell gold to the same country your from. It's not always possible, but it is highly suggested. Selling large amounts of gold to different countries can be very risky. Keeping the business within your own country is the safest since it's more likely the person your giving the gold to is more likely to be someone who is your friend rather than some company.

Don’t sell a little bit to everyone - Sometimes when someone has a few billion to sell, they want to get the best price, understandably. Let’s say buyer A is offering 0.5 per million while buying B is offering 0.51/M and buyer C is offering 0.52/M. The problem is that buyer C can only take 500m while buyer B can only take 300m and Buyer A can take everything. Spreading your trades across these 3 buyers just to make a few extra bucks is extremely risky. Its best to stick with a safe buyer that is able to buy all of your gold. Switching around is just going to lead to an eventual ban which wasn’t worth the extra money made. Sticking to the same place always decreases your chances of being banned.

More in depth: The above example can even get worse. Let's say you have a large amount like 50b and want to sell it all today. Spreading your gold around will #1 get your account flagged and possibly get you banned before you sell it all. #2 cause the marketplace as a whole to drop because of a large amount being dumped into the market. Nobody will want your gold since it's almost guaranteed it will result in a ban and only offer you a fraction of what it is worth to be able to instant flip it.. We have bought 50b+ multiple times from one seller and neither the seller or us got banned. How crazy is that? But, it's not crazy. Its trading using safe practices.

Always stake large amounts! - Staking large amounts of gold such as 700m osrs or more is definitely a great safety precaution. Rather than trading such a large amount, using a stake makes it appear like you lost it in a duel instead. The duel arena does take a 1% tax from the pot but it's a small price to pay to keep yourself safe.

More in depth: Since, Jagex made the rule update and added tax, it made it actually harder for Jagex to be able to see if a stake is real or not and since, 99.9% of stakes are legit. Staking is your safest way of moving your gold around.

How to not get scammed selling RuneScape Gold.

Imagine trading over your life's work on Runescape to someone expecting the money to hit your bank account and nothing shows up. All that time and effort is gone! You need to find somewhere safe and that you can trust.

To avoid being scammed for your hard earned money, you need to buy from a trusted source. There are tons of trusted gold sources and there are also tons of fake ones that pose as being trusted. To check the credibility of a gold source, you can look for their reviews or vouches online. Some of the best places to search for those are Sythe, eBay and a simple Google search.

Step 1: Does the country matter when selling Runescape gold?

Once you have found a few places to pick from, it's time to check where they are from. We are not limiting countries or saying anything negative about any other countries not mentioned in this article, but the best sites to sell OSRS or RS3 gold to would be sites based out of the US, UK or Canada. The reason for this are the laws there to operate as a business. In order to run a business in those countries, cheating customers is a very negative incentive for the business and might even lose them the ability to operate. That being said, a lot of websites may seem like they operate from one of these countries but their employees are really elsewhere and this should be a red flag to you. To review, a website should probably be located and fully operated from a country you are familiar with.

The next step is to check out the reviews and the type of reviews that are important:

Why sythe? www.sythe.org is a place where people can vouch for one another after a transaction which is dated and each person giving the vouch or receiving the vouch has their own vouch thread where you can read tons of other vouches for those users. The sythe admin and moderator team also does a good job of removing people with malicious intent.

Why ebay? www.ebay.com is a great place for reviews because let's assume your looking to buy an item from someone. You can see their overall rating and also see the overall rating of all the people who have reviewed their products. All purchases on ebay are verified purchases, meaning the customer purchased that specific product and left a review on it. You know that the company actually sold the product and that it is not made up. For example, a seller with 100 reviews, and then out of those 100, 90 of them are different users, and out of those 90, 80 of them have over 100 reviews themselves is a great sign to tell that the ebay seller is legitimate.

If you see reviews on a website, it should be paired with another verification source as well. We believe that reviews on a website can be great but should be considered cautiously. Look at what people are saying, does it say “100% best” for every review or does each one have a more detailed and personable experience? If the rating matches the ebay profile rating and the reviews on the site don't sound like robots then you are probably looking at a site that won't rip you off.